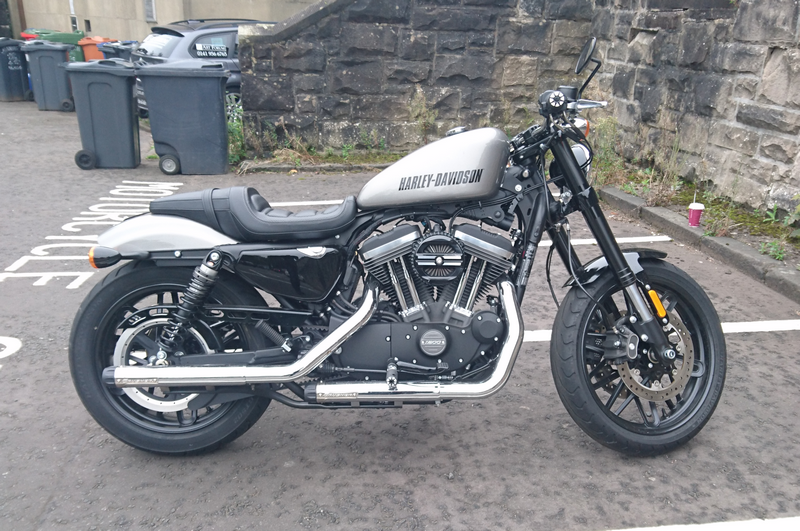 I was down in Glasgow recently getting my bike serviced so had some time to kill so thought I would take a wander around. Curiosity brought me to the doors of West Coast Harley Davidson. I do like retro style bikes and I had seen the adverts for the new Roadster on TV so was interested to see what it looked like in the flesh. I've never been a Harley Davidson fan before but this new bike had aroused my interest.

The showroom is very impressive. Well laid out and the staff were welcoming without feeling like they were pouncing on you. Over a coffee I said that was interested in having a look at the Roadster if they had one in. The only one they had was set up as a demonstrator so we headed outside to have a look round it. The Roadster is based on the 1200 Sportster but given a cafe racer make over. This isn't just a quick bolt on parts special that they had put together to try and cash in on the retro scene but has many fundamental changes over the standard Sportster model to make it a model in its own right. Those include longer travel suspension, USD front forks, decent front brakes, higher seating position and more conventionally positioned foot controls (for a Harley). 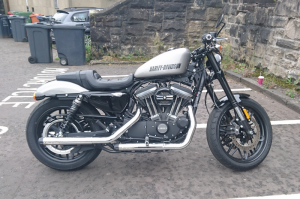 The demo bike had the silver and black two tone paintwork with the read pin stripe which looked lovely and really suited the bike. It was fitted with aftermarket exhausts with a stage 1 tuning kit. There was also a side mounted number plate bracket. Not something I would have considered before but it really did tidy up the back end of the bike. It may not be so good in the wet but I can't imagine too many owners choosing to take a bike like this out in the rain. I'm pretty sure that the salesman told me that all-in the bike had at least £1700's worth
of accessories added to it. 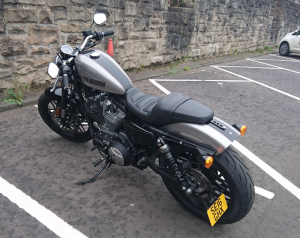 Harley have done a great job with the styling on the bike. There are some elements from their successful FortyEight model on there such as the tank styling. Even though the forks for this bike are all new USD jobs they have kept them black to blend in with the rest of the bike so they don't look out of place. Overall the fit and finish of the bike was impressive. The bike is equipped with mod-cons like ABS, key-less ignition and control of the small information display on the clocks from the bar mounted switch gear. 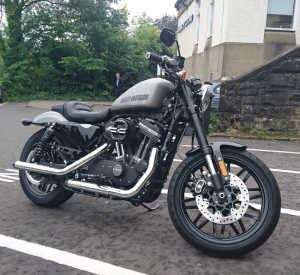 Having dropped my bike off for its service that morning I was already lugging around my riding gear so when I was asked if I would like to take the bike out for a test ride I had to say yes. Paperwork sorted out I was given a quick briefing on the functions of the bike. For those of you, like me, who have never ridden a Harley before then the indicator switch gear is a bit non-conventional. A button on the left had switch gear controls the left indicator and likewise a button on the right for the right hand switch gear. Depending on how long you press each button controls how long the indicators flash for. The indicators also have a self cancelling system which seems to work a treat. The other noticeable difference to most other bikes is the diameter of the grips themselves. Initially they make you feel like you are riding with thick winter gloves on.

With the proximity security key stowed safely in my pocket I started the bike up. The noise from the exhaust immediately brought a smile to my face. The engine bounced around in its rubber mountings in a way that would seem quite alarming to owners of in-line 4 powered bikes. A quick adjustment of the mirrors and a pause to figure out where the foot pegs were then I was away. The gear change was positive and smooth and the clutch was nice and light.
It took me a couple of sets of traffic lights to start to get used to the footpeg position. The pegs themselves are set out wider than I am used to and are exactly in line with my legs when I had my feet on the floor so I had to remember to stick my left leg out a bit further from the bike and back slightly to clear the peg when stopped at the lights. 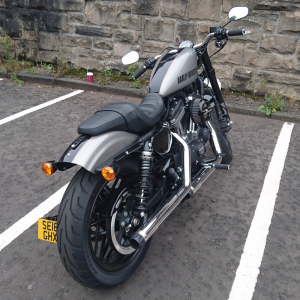 Trundling through the streets of Glasgow on the roadster with the sun shining and the exhaust note reverberating around the buildings felt good. Going with the flow of the traffic felt right rather than trying to slice through it like some mad courier on a mission. The roadster drew more attention from passers-by than any other bike I have ever ridden. The bike was in its element. Even when I took a few wrong turns and ended up some narrow residential streets with dead ends all over the place the bike took it in its stride and never complained.

The one think I was aware of was the lack of engine braking compared to my Monster. I suppose given the bikes mass and the low compression engine then that shouldn't have come as a surprise. Thankfully the brakes worked well. The bike gets off the line well enough for a heavy bike as well but not quite as quickly as you might think given the angry sounding 1200 engine. Having said that it was a lot easier to get off the line than my Monster and is less likely to want to throw you off the back of it. Ground clearance was never an issue for me but then I have never had an issue with ground clearance on any bike I have ridden so that probably says more about my riding style than anything else. 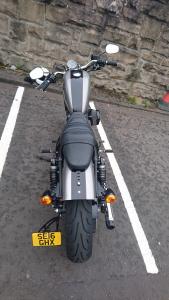 Once I eventually got my bearings I realised that my time was starting to run out and West Coast would be looking for their bike back so I found my way to the Clydeside Expressway and headed back into the centre of town. The bike coped with the dual carriageway just as easily as it had the city streets although you start to notice how spayed out your legs are compared to a "normal" bike so I'm not sure how comfortable it would be over a longer journey.

Pulling off the Expressway to head back to the showroom the bike felt in its element again. More attention from pedestrians made me giggle. I was actually a bit sad when I parked the bike back up outside the dealership. This was my first taste of riding a Harley Davidson and I have to say that I really enjoyed it. I am not the type of person who buys into a brand to the detriment of all others. I like certain bikes from all brands and the Roadster is now definitely on that list of bikes. It's the type of bike that engages all of the senses and makes riding down to the shops an event. All I need now is a lottery win and a big garage to fill. 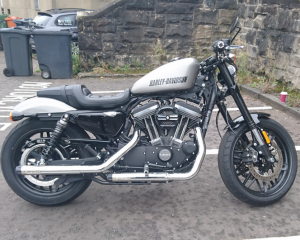 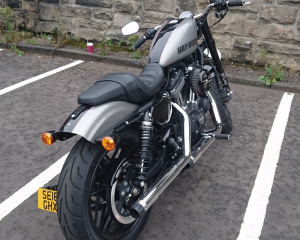 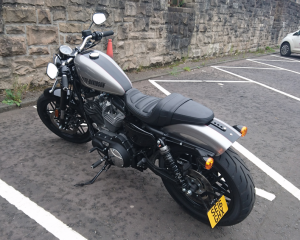 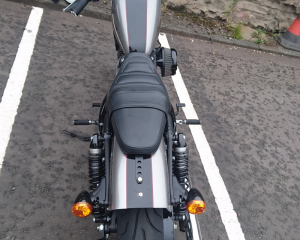 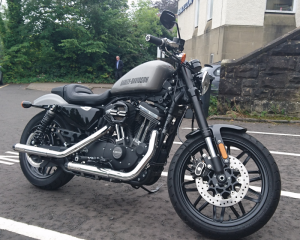 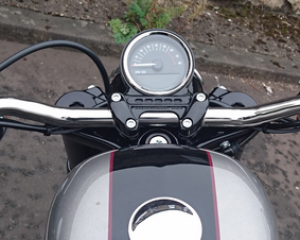